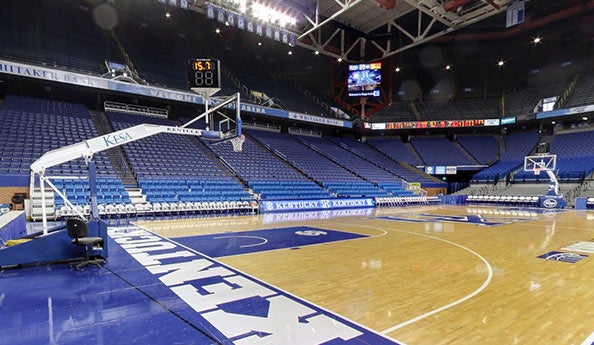 3 Basketball Goals to be Auctioned in February

LEXINGTON, KY (Feb.6, 2017) – Three basketball goals used in Rupp Arena from October 2000 until September 2016, will be sold to the highest bidder commencing on February 6th  until February 27th at 4 p.m., it was announced today by Bill Owen, President and CEO of the Lexington Center Corporation.

The BPI Model 10,000 goals were used on Rupp Arena’s legendary “Cawood’s Court” from the 2000-01 basketball season through the 2015-16 season.  Both the home bench and visitor bench goals are included along with an auxiliary goal.  As Rupp Arena is the home court for the University of Kentucky men’s basketball program, numerous All-Americans, both from UK and from opposing teams, have rattled these rims, splashed threes and floated teardrops in these baskets over a decade and a half of intense competition.

Goals will be available for inspection on February 10th and 17th between 2:00 p.m. and 3:00 p.m. behind Rupp Arena at the Service Entrance.

LCC reserves the right to sell the goals as a group or individually, whichever results in the highest price.  Bids should declare the amount offered for each of the goals individually and an aggregate amount offered for all three.  Bids must include a deposit equal to 33% of the amount of the bid and payable to the Lexington Center Corporation by certified or cashier’s check.  The successful bidder will be required to remove all purchased equipment and pay the balance of the bid by March 10, 2017.